Queensland Blue Couch is a very popular choice for home-owners in the warmer parts of Australia. It is known for its low growing lush coverage, which provides a soft, weed resistant lawn.

Queensland Blue Couch is a warm season grass suited only to the warmer regions of the country.  It is a very soft, deep blue-green, fine textured grass that has good drought tolerance once its roots have grown deeply. It also does not thatch up like many other warm climate grasses.

It has a similar appearance to a genuine Couch grass, but with a wider leaf blade which tapers into a pointy tip. It has an attractive blue green colour which can turn slightly purple in the Queensland Winter.

For best results, plant in a climate that ranges between 18-25 degrees Celsius, and fertilize a couple times a year with McKay’s Slow Release Fertiliser.

If you are living in parts of Australia where the temperature regularly exceeds 25 degrees, we recommend going with the Pure Queensland Blue Couch Seed as the Annual Rye will not survive long in temperatures over 30 degrees.

For more information see below for Description and Features to see if this grass suits you!

Often referred to as Queensland Blue Couch this grass is neither from Queensland, nor is it a true Couch. It was made popular in Queensland due to it’s optimum performance and suitability to the warm climate.

As this grass is a different species to a traditional Couch grass this needs to be considered when choosing herbicides or pesticides for use on the lawn.

Optimal pH: Queensland Blue Couch grows well on a wide range of neutral to acid soils; it is tolerant of very acid soils- pH 5.5 and lower.

Sowing Tips: Sow into soft top soil or sandy loam. Broadcast the seed at, or very near, the soil surface and incorporate lightly with raking. To ensure best coverage and avoid seed wastage we recommend using an appropriate seed spreader for the size of your area. Soil must remain damp throughout the germination period of both seeds and must be maintained for at least 1-2 weeks after sowing, through irrigation or natural rainfall.

Mows beautifully with a cylinder mower or rotary. It can be mowed very low for bowls or croquet (35mm). Once mowed, it never leaves an unsightly appearance of cut and exposed stolons (runners) like other lawns may do. It is less aggressive than real couches, and doesn’t thatch up nearly as quickly as Couch grass. It produces minimal seed heads compared to standard couch varieties meaning this is an easier to mow lawn. 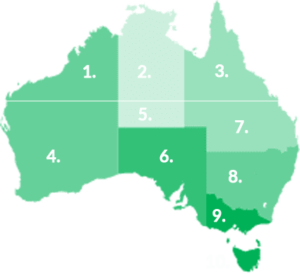 Very impressed. I spread the seeds out on a dead patch only a couple of weeks ago and it looks great! Very highly recommended. I did cover the ground with Seasol liquid seaweed compost on the ground first. Spread the seed evenly then covered it with a good compost soil mix. It looks good! Might wait a couple more weeks before mowing it so the roots get hold of the soil. 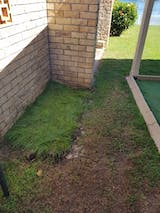 I had no luck over sowing my blue couch lawn. Not sure if birds ate the seed, but nothing struck and I'm scratching my head a bit to be honest

We were able to have grass growing in just 4 days, we have a very steep block and were able to take up just 3 kg of seed instead of many, many trips back and forth with turf. We now have a lawn which we are proud of !!!

The seeds have only been down 9 days and they are sprouting already. Who says it’s boring watching grass grow. I’m impressed.

If so, please click here to view the store servicing your state.
Otherwise, click anywhere else (or hit ESC key) to shop for all other states in Australia.
View Cart Checkout Continue Shopping

Shopping Cart
There are no products in the cart!
Continue Shopping
0