What Are the Best Uses for Clover?

Clover isn’t technically a grass, it’s a legume, but it’s sold by grass seed companies because it’s very useful in the yard. Whether that’s as part of a lawn, as a ground cover, or in the garden, clover is a very handy plant.

Red clover and white clover are the two widely available varieties of clover in Australia. They both enjoy most of the same positive qualities, but white clover tolerates the heat more so than red clover. Red clover is most commonly used a fodder crop whereas white clover is more versatile and is used for domestic gardens as well.

Clover – red or white – is known for its ability to fix nitrogen, its tolerance of poor soil, and its deep-growing roots. With those positive qualities in mind, let’s look at the best uses for clover. 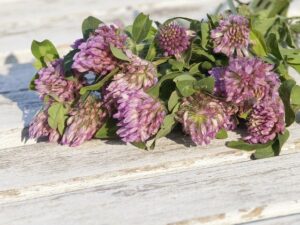 This is the most widely known use for clover in gardens, fields, and orchards. The clover plant takes nitrogen out of the air and, through special bacteria which grow on its roots, fixes it into the soil, therefore improving the soil. It’s like free fertiliser!

For this reason, clover is great when used as part of a lawn, or as a ground cover at the base of larger trees and shrubs, or as a rotation crop. Purely for having clover grow in it for a season, soil quality is improved, much to the benefit of current or future plants.

Not only is clover a great nitrogen-provider for orchards and vegetable gardens, it’s also a great living mulch. Planting clover at the base of your fruit trees provides shade, keeping the soil moist. It also keeps weeds at bay. An added bonus is that its flowers attract bees, improving the pollination of your fruit trees.

Part of a Lawn Blend

Mixing clover seed through your other lawn seed allows you to include clover’s beneficial attributes to your lawn. Its deep root system means it’s drought tolerant, its hardwearing nature makes it perfect for a family lawn, and its nitrogen-fixing will help the other varieties it’s planted with. It also makes a great companion variety in a lawn blend as it suppresses weeds. Clover pairs wonderfully with cool season grasses such as ryegrass and tall fescue.

Whilst a patch of pure clover can’t necessarily be mowed into a traditional turf, it can make a great low maintenance ground cover. It needs less frequent mowing, isn’t invasive, doesn’t need fertilising, and is very traffic tolerant. Clover rarely has a problem with insect invasions, in fact it actually attracts beneficial insects to your garden with its flowers.

White clover is the clover variety best used as a lawn, as it can tolerate quite warm summers and periods without rain, as well as growing shorter than red clover, therefore looking more like a traditional lawn.

The deep roots and soil-fixing nature of clover makes it able to be used for erosion control. If you have a patch of soil that’s prone to erosion, growing a stand of clover over it will strengthen it and keep it from being washed away. 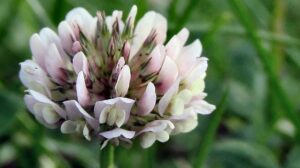 Clover is highly palatable and highly nutritious. Owners of cattle, sheep, and horses (or any other animal you might find yourself rearing) will find that their animals will enjoy chowing down on some red or white clover. The nutritional value of clover is excellent, so the value you get from a bag of clover seeds is impressive.

Aside from allowing your livestock to graze on a paddock of clover, the plant can be harvested and turned into hay or silage to be used for future feed. Red clover is the best variety for hay and silage as it grows taller than white clover.

Many traditional cultures use clover as part of herbal medicine, but you don’t need to go that extreme to find clover useful. Even people with the least alternative lifestyles can find a use for clover in the kitchen. The leaves of the white clover plant are becoming a fashionable leafy green, much like kale. White clover leaves make a great addition to salads and soups, and the flowers can be used to make a herbal tea.